Extreme pioneers in marriage, business, love, and sex, Baba Richard and Sri Namaste Moore work in private with some of the world’s most exciting couples. Known as The Infinite Couple, they have been living, loving, and working together for over 18 years.

Through their teachings, expertise, and offerings, they help couples create a potent pathway to sacred love, business growth, and spiritual alchemy. They’re leading a global revolution for highly successful couples who are driven to transcend the mundane and bring their greatest vision of life together.

One highly successful couple who might have benefitted from Richard and Namaste’s help is billionaires Bill and Melinda Gates, who earlier this year announced they were parting ways after 27 years of marriage.

Three years ago, Bill and Melinda Gates answered a range of personal questions in their annual letter, offering a rare peek into what kept one of the world’s most powerful couples together.

“For our wedding,” said Melinda, “Bill’s parents gave us a sculpture of two birds sitting side by side, staring at the horizon. We keep it in our front yard as a reminder that we share vision and direction,” she said.

In an interview aired on CNBC, Melinda Gates later added, “What we love about it so much is that it’s these two birds who are looking forward together. It reminds us that these two birds, who presumably are mates, have a shared view out into the world.”

At that point in 2018, the Gates were 24-years married, and the sculpture still held pride of place outside their house. “I think of it all the time because fundamentally we’re looking in the same direction.”

“Their analogy about ‘two birds staring towards the horizon’ tells us a huge amount about why their marriage ultimately failed,” says Namaste. “They were married to the vision when they should have been married to each other. Looking in the same direction could be parallel to each other. Marriage should be about where your perspectives converge.”

She goes on to explain that while the Gates’ vision might have been shared originally, the fact is we build a new spiritual body every 6-12 months. “So in their marriage, there was a gradual, little by little divergence, a drifting apart,” she says. “Whatever’s more important than the marriage will ultimately destroy it.”

Namaste points out that the care and feeding of marriage are very different from a business. “Yes you can make a success of both, but the approaches are not the same,” she says.

The Moores speak from experience, having proved it is possible to have both a successful, long-lasting personal relationship while running a seven-figure business together.

One of the programs offered by The Infinite Couple covers that very topic – Should You Mix Marriage And Business? – aimed at opening up a juicier life together that’s focused on your unique vision, purpose, and legacy.

Another, The CUP Quest, an archetypal test, helps find out why your archetype is holding back marriage bliss, business mastery, and limitless abundance.

The 8 couple archetypes describe how different couples function in business together – your partnership is compared with famous couples, like Jackie and JFK, or Marge and Homer Simpson.

“This helps us understand the strengths in your relationship, and how those strengths could also tear the partnership apart,” says Namaste.

Another trend that Gates’ divorce points to, is that of the so-called ‘gray divorce’.

Also known as Silver Splitters, the term refers to the demographic trend of an increasing divorce rate among older couples in long-term marriages. Bill and Melinda Gates join the ranks of other high-profile gray divorcees alongside former American vice-presidential couple Tipper and Al Gore, and music duo Captain and Tennille.

Attributed to various factors including a decreasing stigma around divorce, and adult children who are increasingly supportive of their parents being happier apart than miserable together, gray divorce rates have more than doubled over the past two decades.

It’s an area that Baba Richard and Sri Namaste are increasingly focusing on. Back to their belief that the spiritual body rebuilds every 6-12 months, the Infinite Couple sees the constant nurturing of a relationship as ‘The Evolution of Marriage’.

The Evolution Of Marriage 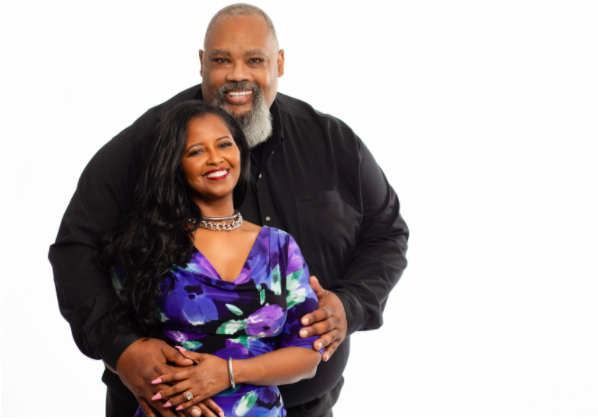 This could apply to evolving a long-term marriage, or how to learn from past mistakes when you find another chance at true love and happiness. “Many divorced people have given up on marriage, we help them ‘drop their armor’,” Richard explains.

Both Richard and Namaste have been through divorce, now boasting eight adult children in their beautiful blended family. But their parental backgrounds were worlds apart on the marital front. While Richard’s parents were married for his entire life, Namaste’s mother was divorced multiple times.

“I come from a very different space,” says Namaste, “and then we found each other. We truly believe that the experiences that we both had helped us find our way to each other.”

So can they help fix an ailing marriage?

“We don’t offer ‘marriage triage’,” says Richard, advising therapy or marriage counseling for those who feel their marriage might be beyond repair. “We can’t decide for our clients whether they should end their relationship, or try and fix it. But we do have several ways to help couples figure that out for themselves.”

The Infinite Couple’s Dyadic Consciousness Program looks at what marriage has become and helps clients evolve their relationships accordingly. “If marriage is to survive and thrive in this new era it is what people must shift into. This new consciousness landing is also evidenced by the rise of the gray divorce,” says Richard.

“Mindset is everything,” adds Namaste, “couples – or any of our clients – have to believe they’ll get there. We can definitely help, but they need to have their destination in mind.”