Today we celebrate Darin Burnham’s success with Speed Keto®, a keto diet program known for its fast-acting and sustainable fat-burning abilities! Darin will be walking us through his 18-month long experience with Speed Keto and telling us how it has affected both his health and his overall wellbeing.

How long have you been on the Speed Keto diet program?

Darin Burnham: I first tried Keto with my wife around 18 months ago.

And, how soon did you see results with Speed Keto?

Darin Burnham: As promised on the packaging, the wife and I saw physical changes hit us after just 30 days of the Speed Keto diet.

How would you describe your level of physical activity before and after Speed Keto?

Darin Burnham: Well, before the wife and I started Speed Keto, we weren’t the most physically active. Both of us had work and school full time, so fitting in a heavy exercise program into our schedule was nearly impossible. Doing Speed Keto didn’t really change this though. All we changed was how we were eating.

The Speed Keto meal plan ended up being perfect for our cramped schedule. It allowed us to lose weight without having to sacrifice our energy for anything outside of work and school. And, when we did eventually graduate, the energy boost that we got from eating healthy and losing the extra pounds did wonders for us when it came to getting back into exercising (our preferred method being long-distance biking, but hiking is another favorite of mine as well.)

Have you tried other diets in the past? How did those compare to Speed Keto?

Darin Burnham: The wife and I avoided most diets.’ But yes, we have tried a few. The most notable being the Zone diet. That wasn’t that bad. We saw some weight loss, so it kind of worked. The only issue with it was that it was not sustainable. We suffered from constant cravings while on the Zone diet! And the constant ‘cheating’ that we did led to us gaining weight just as fast as we were losing it.

With Speed Keto, the cravings were practically nonexistent. Which helped a lot in keeping the weight from coming back on. That’s been the biggest difference I think. That is, that, unlike most other diets, Speed Keto is sustainable. 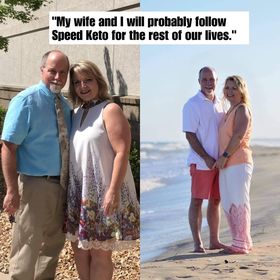 What advice would you give to someone hesitant to try Speed Keto?

Darin Burnham: Just jump in and do it. Give it a shot! It really isn’t all that scary. The recipes are great, the meal plan is super easy to follow, and there’s just so many reasons why you should try it.

One can even say that weight loss is just an ‘added bonus’, what with Speed Keto’s numerous health benefits. Case in point, my cholesterol, blood pressure, and triglyceride numbers have never been better! It even, essentially, reversed my heart disease to the point where it’s controllable without any medication!

Have you ever been on the Speed Keto Facebook Group? What was your experience with the people there?

Darin Burnham: I have! And, let me just say… The support on that page is amazing. The Speed Keto Facebook Group is inspiration, motivation, and information all in one friendly and uplifting package.

Making such a big lifestyle change is not easy for anyone. I’m lucky that I had my wife go through that experience with me, but for those that don’t have that special someone backing them, I bet the friendly members and moderators that lurk in that Facebook Group are a great help.

What do you think of the Speed Keto Meal Plan?

Darin Burnham: Harlan made the plan very easy to follow! Everything is all planned to a ‘T’, and when the wife and I found ourselves preferring one recipe over the one slated for certain days, it was easy enough to substitute things to suit our tastes on any given day.

Oh! And the FREE recipes on the Speed Keto Facebook Group are nothing to balk at either. I’m sure you could create multiple cookbooks with just those recipes alone. So, you will never have to worry about being bored with your meals while on Keto. If you want to change things up a little, it’s easy enough to keep things fresh and exciting by trying out one of the specialized Speed Keto recipe books too.

Will you be recommending Speed Keto to your friends and family?

Darin Burnham: You better believe it! I’ve got people constantly asking me about how I lost weight, and I’ve never (and will never) hesitate to point them towards Speed Keto.

NetbaseQuid Makes It Easy to Do Your Social Media Audit

Paediatric Dentists Fighting For The Re-Evaluation Of Baby Teeth

Paediatric Dentists Fighting For The Re-Evaluation Of Baby Teeth

DJ Xclusive City Is Bringing the Vibes to Twitch