by Anil Awasthi
in Politics
0

Two days ago Twitter announced they were suspending 7,000 Qanon accounts and censoring 150,000 of them. There have been thousands of media hit pieces calling Qanon a baseless conspiracy theory, but it hasn’t done anything to stop the growth of the movement. The Qanon movement has been unstoppable and now people are taking an oath to defend the Constitution and Freedom in the United States. They are joining the other Qanon digital soldiers that are bringing awareness to the worldwide pedophile and human trafficking problem.

Qanon and the Digital Soldiers Mission

The Digital Soldiers have an important mission and have been given their orders from the United States military. A division of the military that works against information warfare. Information wars are a form of irregular warfare which can only be fought online. The United States military has established an alliance with citizens that are working directly with military intelligence to fight online. This is proven and declared in Q Drop 4509 which can be found on Qmap.pub with hundreds of proofs and intelligence information.

You have been selected to help serve your Country.  <——- THIS
Never retreat from the battlefield [Twitter, FB, etc.].
Use other platforms as a form of centralized command and control.
Organize and connect [bridge through linking].
Source meme(s) material from battlefield and/or garage [highlight & share][take & drop]
Mission 1: Dispute [reject] propaganda push through posting of research and facts
Mission 2: Support role of other digital soldiers [one falls another stands (rises)]
Mission 3: Guide [awaken] others through use of facts [DECLAS 1-99 material and other relevant facts] and memes [decouple MSDNC control of info stream] _ask ‘counter’ questions to initiate ‘thought’ vs repeat [echo] of MSDNC propaganda
Mission 4: Learn use of camouflage [digitally] _primary account suspended-terminated _use of secondary
Mission 5: Identify strengths / weaknesses [personal and designated target(s)] re: Twitter & FB [+other] example re: meme(s) failure to read through use of ALGO [think Tron (MCP_master control program)] _dependence on person-to-person capture [slow response time unidentified user(s)]
Game theory.
Information warfare.
Welcome to the Digital Battlefield.
Together we win.
Q 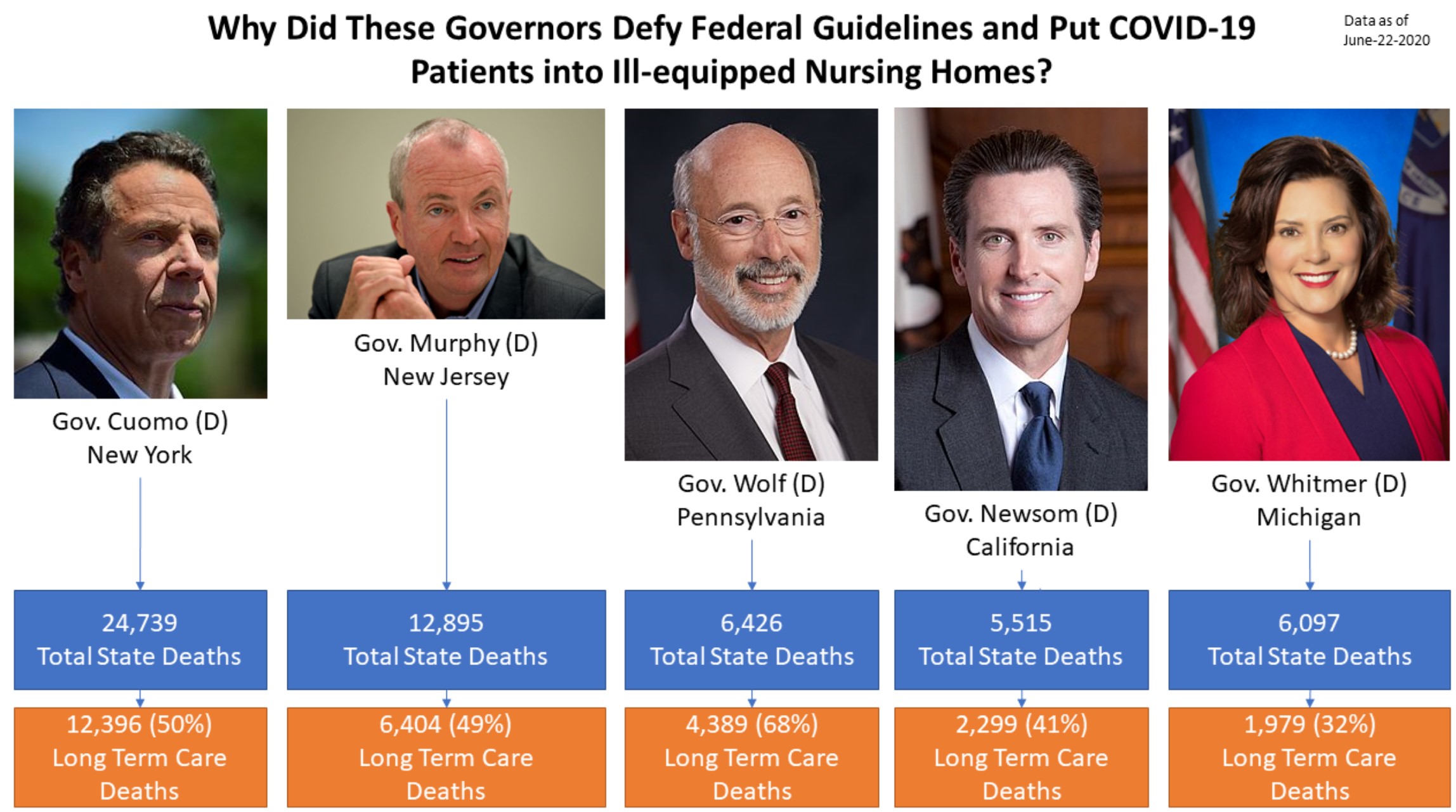 Censoring of Qanon Digital Soldiers does only 1 thing. It strengthens their resolve and their fight to win. When Pearl Harbor was attacked, Japanese Admiral Isoroku Yamamoto, who planned the attack on Pearl Harbor would reportedly write in his diary, “I fear all we have done is to awaken a sleeping giant and fill him with a terrible resolve.”

CEO of Twitter Jack Dorsey should be saying, “I fear all we have done is awaken a silent majority giant and filled them with an unstoppable resolve”.

That’s exactly what the Anons have done. Digital Soldiers are enlisting in all different media platforms online. Twitter just caused Qanon to go viral and it will hit critical mass. George Soros is the man behind funding everything that is destroying America. Including funding most of the politicians so that they will be his puppet.

How to Instantly Stop Qanon

The media has been intent on falsely categorizing the Digital Soldiers as “dangerous” and they have tried to stop it with defamatory hit pieces and has failed. Who exactly is behind the push to silence Qanon and why are they really attacking them? It would be so easy for the media to stop it in 1 day. Whoever does this 1 simple thing would be a hero to all socialists, democrats, and radical far lefties around the world. They would undoubtedly win the Nobel Peace Prize.

Ask the Commander and Chief of the Military

President Trump has been starting up daily press conferences again, and that would be the ideal opportunity to crush Qanon once and for all. President Trump is the Commander and Chief of the United States Military. If there is in fact an alliance of Digital Soldiers with the U.S. military he would know about it for sure. In fact, the intelligence drops are sometimes signed Q+ instead of Q. Digital Soldiers know that when Q+ signs the drop, that the President himself has done it.

Now you understand how easily this would be to end once and for all. One question. One answer.

Think logically for a moment. Why would the media waste the last 2 1/2 years allowing the “dangerous” Qanon movement to grow when anyone in the media, like grandstander Jim Acosta, could have asked 1 simple question to stop it. Who is the genius behind their strategy in this information war? The media are clearly the stupid ones here.

Obviously, anyone at a press conference could ask President Trump if Qanon was a legitimate alliance of civilians and United States military.

Recently President Trump, Q+, posted this meme for the “Anons” letting them know to stay with him. The wheels of justice have turned very slowly making some people understandably impatient. 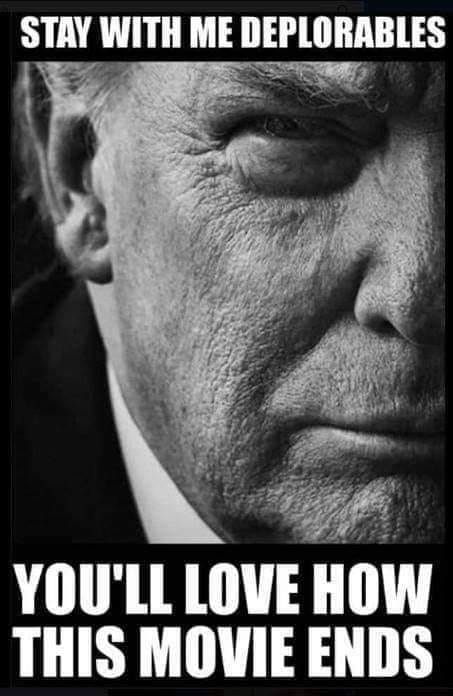 Why Does Chrissy Teigen Openly Proclaim Lusting for Children

When people saw Chrissy Teigen’s tweets about how she lusts after little girls they started to question her. The questions being asked of her are justified given what she has broadcasted to the entire world. Let’s take a look at a couple of her tweets to see if people were justified in questioning her and “swarming”.

Chrissy Teigen Tweeted this out one day, “seeing little girls half naked is just…..i want to put myself in jail.” 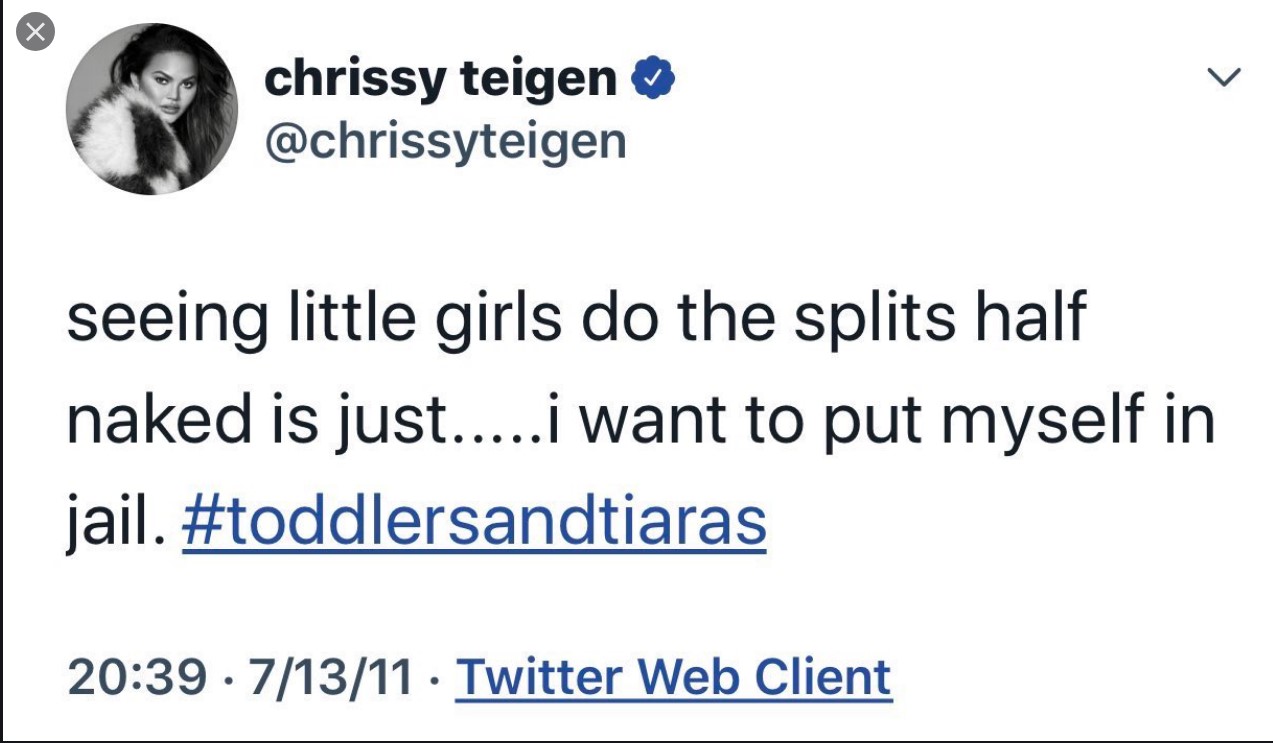 A normal person would find that tweet extremely disturbing and inexcusable. She is openly confessing that she lusts after little girls and should put herself in jail. This kind of talk about exploiting children should never even be considered a joke. These statements come from people that are just not right.

It doesn’t take being a “qanon” to see why that kind of talk would infuriate people. She had to delete 60,000 tweets because within that were hundreds of tweets outing herself as a pedophile and yes, people were disturbed by what they saw.

James Woods called her out for it. He regularly gets suspended for pointing out the obvious things like, that is a really disgusting tweet you posted about a child. Twitter has a policy that it is o.k. to Tweet this kind of garbage. However, it’s not o.k. to point it out and disagree with it or you will be censored!

Teigen also tweeted, “I’m about to Anthony Weiner this kid”, and “i now know what parents go through when they tie their kid up in the basement. you have to do it. but it’s icky amiright?“. I would say this is not okay, amiright? 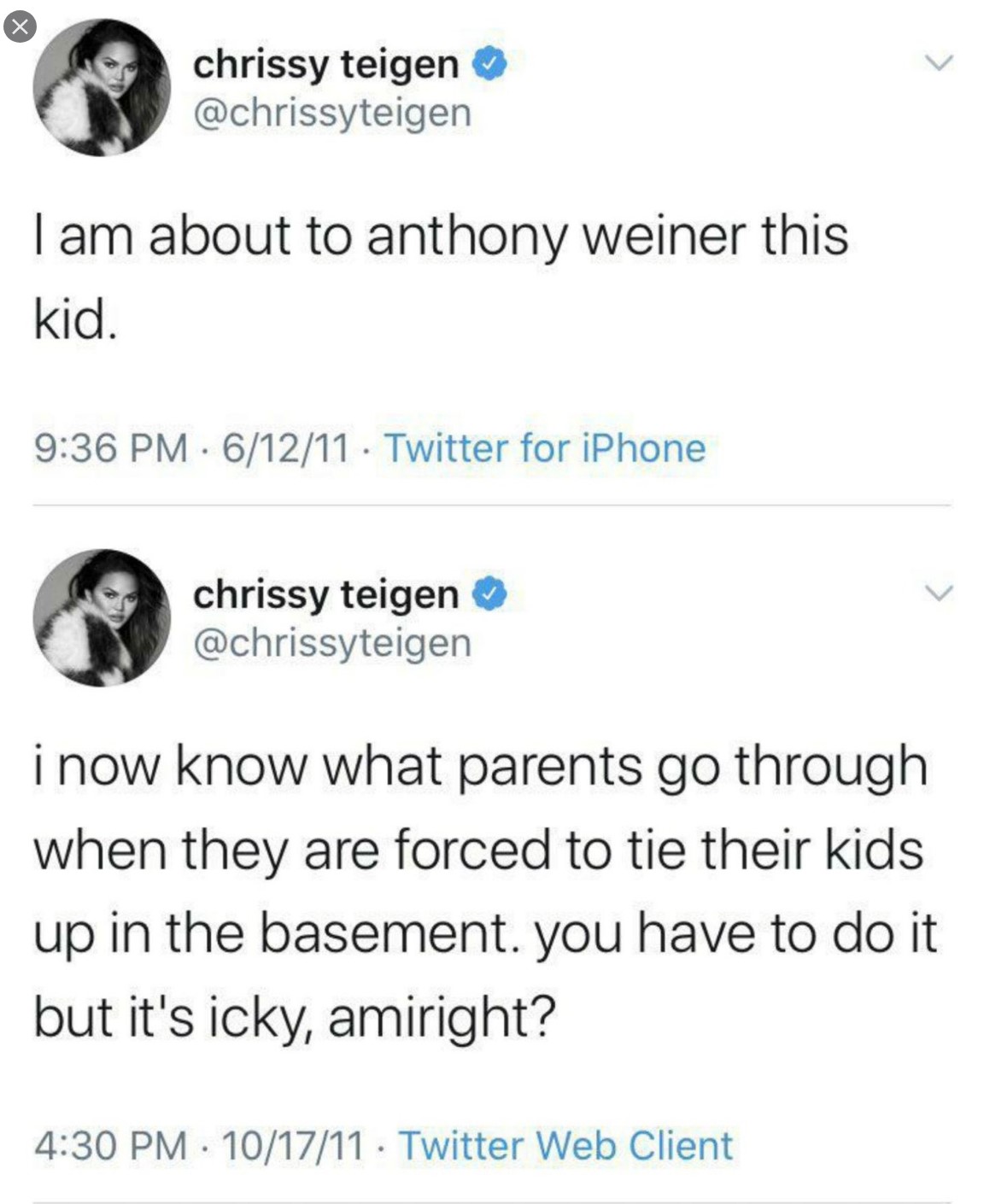 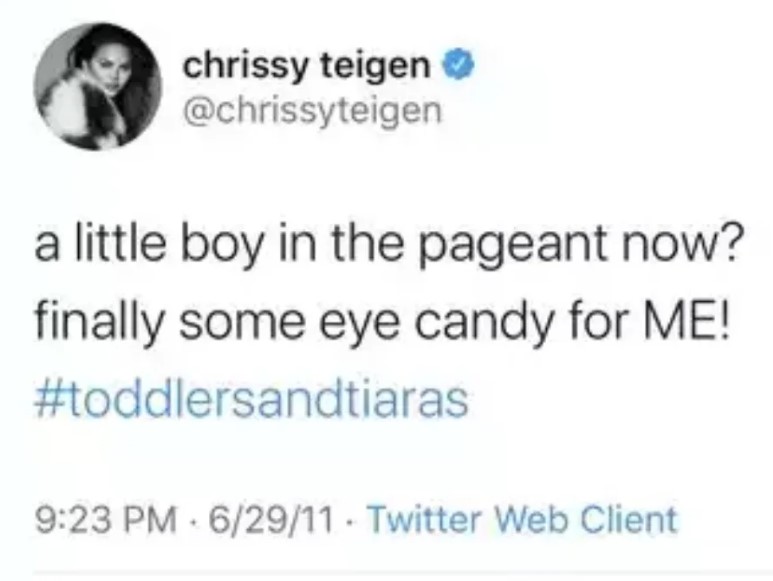 Twitter is now censoring people that are trying to hold pedophiles accountable. Evil rises when good men and women do nothing.

A great awakening has started as more and more people have started to speak up and not let the mob silence them. The silent majority is afraid to speak up about these things out of fear that they will be immediately be banned online losing their account. 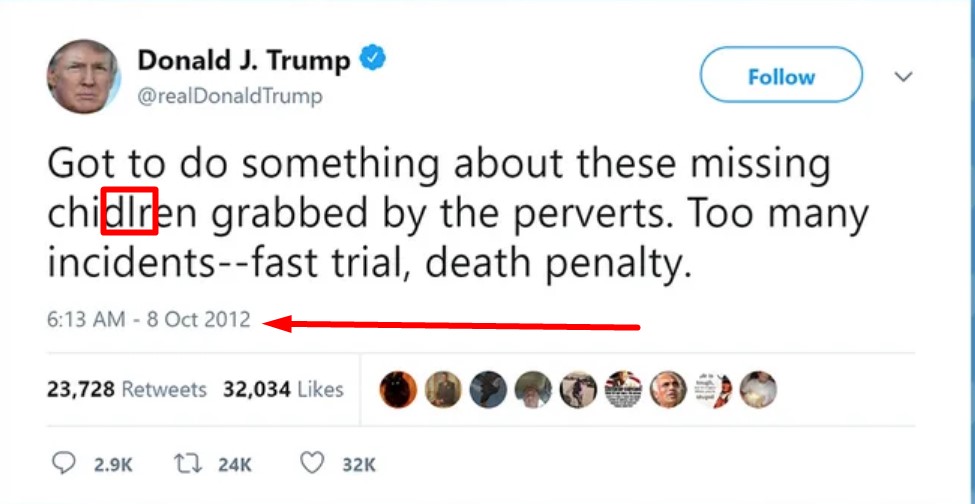 Over the last 2 years there have been a record number of arrests made on human trafficking rings in the United States and around the world. The media is silent. The media is complicit in a cover up. Human trafficking isn’t just groups independently working on abducting children. Child trafficking is a world wide crime organization with levels of hierarchy. Noone in the media follows the money or brings awareness to the problem. They stopped doing their job and millions of children around the world have suffered because of it.

The Storm is Coming

The calm before the storm is nearly over and the main event is about to go live. The stage is nearly set. The Supreme Court cleared the way for the death penalty 3 weeks ago and the first federal execution in 17 years happened last week. Bill Barr stated in a recent press release that many more are to be scheduled. The death penalty has been brought back to deal with the worst kind of criminal. Those guilty of crimes against children. The path is now clear. Fast trial. Death penalty. The National Guard and Federal Law Enforcement are being deployed around the country and it’s almost time to send in the Marines. Human Trafficking Ends Now.

July 30th is World Day against Trafficking in Persons. The timing couldn’t be better. Everyone needs to get loud that day for the children. That includes praying that God gives us the power to defeat the evil that has been brought upon the victims of human trafficking.

Text “HELPTHEM” to 51-555 for further instructions on how to get loud for the children and Rise Up!

Digital Soldiers around the world are increasing awareness of the child trafficking problems. Don’t be silent anymore. Get loud to save the children on July 30th.

For more information on how you can help to stop child trafficking watch this video on Instagram of Tim Ballard explaining their mission. Tim Ballard is the CEO of Operation Underground Railroad. In the video he mentions that the way Wayfair has been accused of selling children is actually how it is done online whether Wayfair is involved or not. Instead of digging into that more, the fake news media laughs at anyone that would question whether overpriced items online might actually be children. Tim Ballard says that absolutely is happening. Mainstream fake news media covers it up by intentionally not reporting it and steering away from any such thing.

“With or without Wayfair, child trafficking is real and happening!!! 2020 has been a horrific year for our children, continually being forgotten and overlooked. Reports of child abuse cases are millions higher this year than they were last year. This is not a small thing or a conspiracy theory, this is the fastest growing criminal enterprise in the world. The children need us.”

Citizen Journalists are Answering the Call of Duty

The news media is being replaced by Qanon and Digital Soldiers. Watch General Michael Flynn describe why this was going to be created.

Q asked General Flynn if he was ready to serve again. General Flynn acknowledged that he was. Undeniable proof at qmap.pub – see for yourself, don’t listen to the fake news. Research for yourself and believe in yourself.

This is about getting the truth out there. Since the media doesn’t care about this, we will do it ourselves. Qanon is not a small fringe conspiracy group. It is millions of citizen journalists across the world that care about freedom and truth. Logical thinking. Why are these people trying so hard to stop the spread of this information? Remember, if Q isn’t a real military alliance of citizens and military it could be ended with 1 shot. They are afraid the answer will be the shot heard around the world and the beginning of their end.

Where We Go One, We Go All

How Tiana Burse is Trailblazing During an Unstable Economy

Fans Are Thrilled For New Single ‘Another Star’ By Earthquake Lights

Mobytheplug, The Rising American Rapper, is Getting Ready To Impress His Listeners Once Again

Workplace Injuries: What You Need to Know About Your Rights

HVAC Technician: How to Become One and What They Do

Why Flowers Make the Best Gifts for Any Occasion

Music Has Been The Biggest Influence In Jay Five’s Life

Tips to Follow If You’re Involved in a Car Accident

Pressure Washing: The Proven Way to Clean Your Home or Business

Top Reasons to Travel to Africa in 2022